The Palace of the European Commission of the Danube (ECD)

The current headquarters of the County Library “V.A. Urechia ”, formerly - The Palace of the European Commission of the Danube (CED), was originally built, between 1893-1896, as the administrative headquarters for this first European institution, established after the Peace Congress of Paris, in 1856, in order to regulate the regime of navigation on the Danube 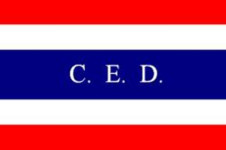 The site itself is an European edifice, since the construction decision was taken by the representatives of eight European states, the construction was carried out with “European funds” and is representative for the values in which the E.C.D. believed in, assumed by the EU today. This is the actual place in which the clerks of different departments, such as the Secretariat General, the Accounting Department, the Archive and the Library, performed their activity. This is the location in which the E.C.D. plenary meetings took place and is also the place which provided accommodation for a part of the clerks.

The European Commission of the Danube functioned in this seat until its dissolution in 1948. Between 1948-1968, the building was the seat of several institutions from Galaţi and since 1968 it has been assigned as the seat of the “V.A. Urechia” Public Library, an institution that still functions here nowadays. 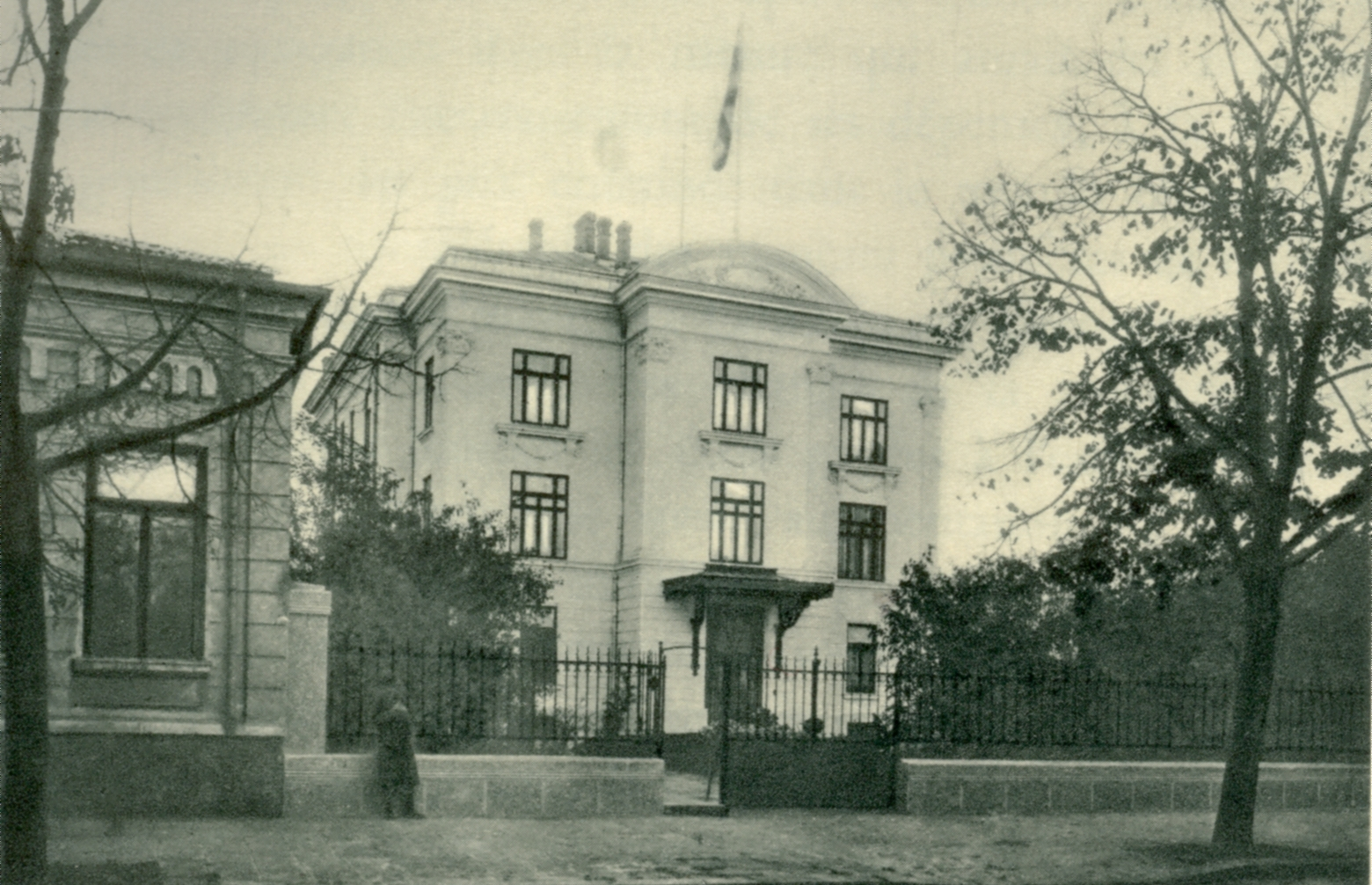 The Palace of the European Commission of the Danube (ECD) 1921

The site, which is under the ownership of the Administrative Territorial Unit of Galați, represented by Galaţi County Council, represents a cultural symbol of Galați, a sober style architectural monument, which recalls the old town image, from the period of the 19th and the first half of the 20th centuries. The current configuration of the building is mainly the result of the reconstruction from the ground, performed by Societatea Română de Întreprinderi din Bucureşti (Romanian Society of Enterprises from Bucharest), between June 23rd 1923, the old building being severely damaged during the First World War. The building is part of an urban heritage ensemble, which stretches up to the Danube cliff and the port of Galați. At the entrance into the building, there are elements signalling its the statute of the building as historical and architectural monument. 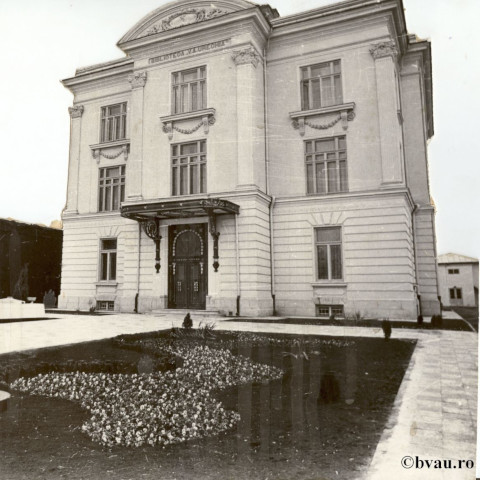 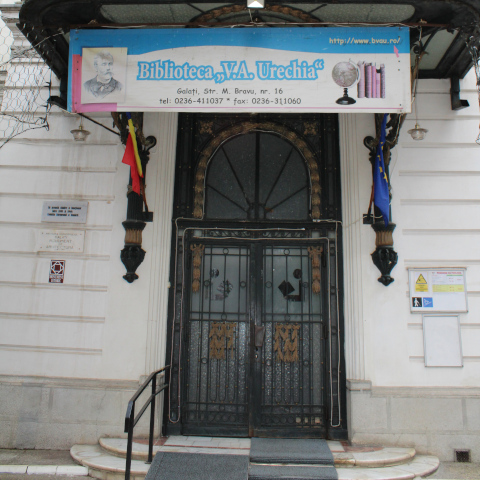 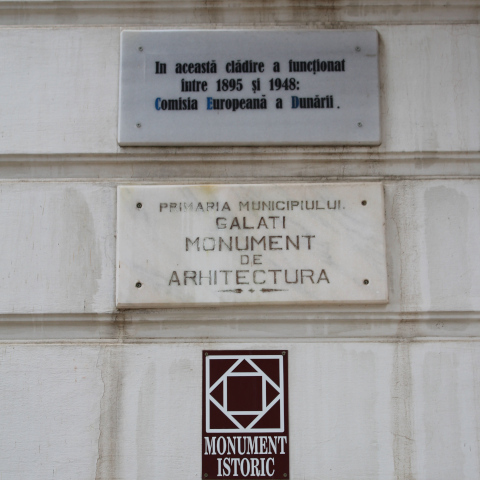 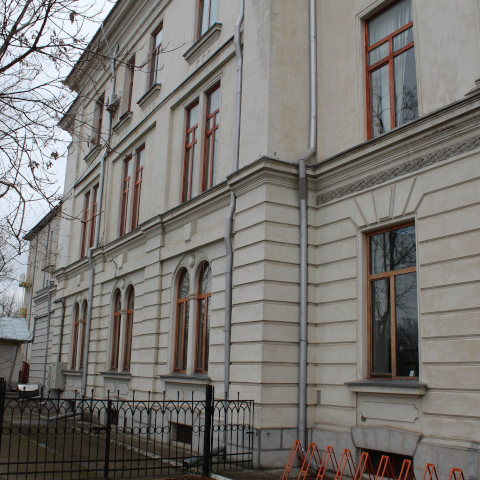 Built in Neoclassical style, the building preserves many of the original architectural elements: the French-style door with crystal windows, from the entrance to the main hall, the stucco on the interior walls, the seemingly columns on the first floor, decorated with plant motifs and specific symbols – the anchor, the trident, the horn of plenty; the pavements, marble stairs and mosaic; the railings with hardware; the skylight on the first floor, made of transparent glass, bordered by colored areas, adorned with bay laurel leaves; wood pannels of different essences, medallions with the E.C.D. initials; the chandeliers and other metal wall sconces. In the semi-basement, there is still the safe deposit box that preserved the treasures of the Commission. On the left wing, there is a functional small items elevator, which connects the basement to the second floor.

Outside the building, the delimitation between the ground floor and the 1st one is represented by a profiled fascia board, which has vegetal pattern decoration on the lower part. The semiarched pediment is richly adorned and supported by two columns wrapped in codlines. The windows of this floor are decorated with bay leaf wreaths, on the bottom part. In front of the building, right next to the street, there is a green area, bordered by an iron forged fence, which has undergone some changes in time. 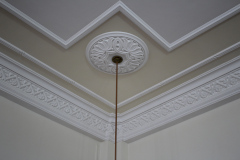 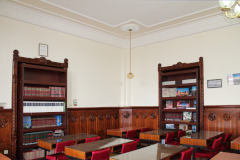 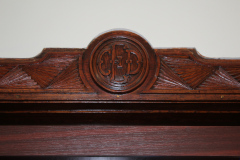 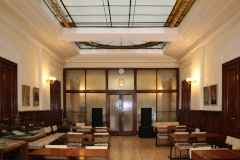 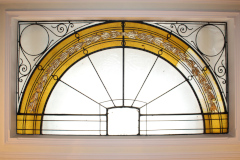 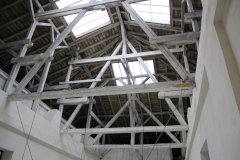 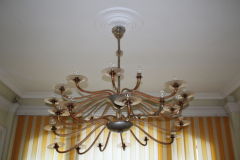 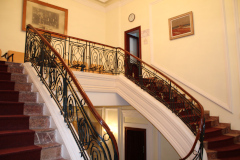 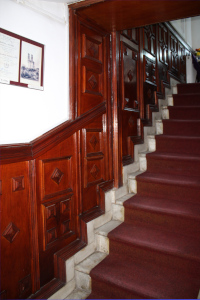 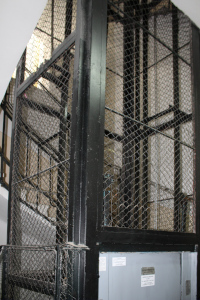 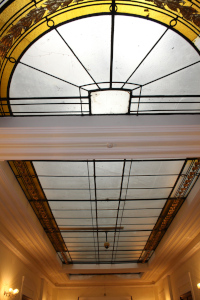 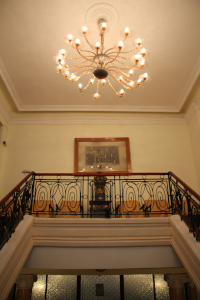 Pictures with details inside the building

As it has the statute of heritage building, subject to restrictive rehabilitation/modernization regulations, the site has preserved its exterior and interior architecture intact, during various maintenance or rehabilitation works. Currently, “V.A. Urechia” Public Library management structures manage both the maintenance of the building and the entire activity and the whole range of scientific and patrimony resources that it holds and is supported all along by Galați County Council.

At the present moment, the building has a platform-elevator for disabled persons and tactile elements for visually impaired persons, so that access to the building and its collections is not restricted to anyone.

The library annually invests in repairing works, sanitation, security and protection services, basic utilities, for proper functioning. The site has a building monitoring system, with surveillance cameras. The sums invested for this purpose are entirely provided by Galaţi County Council, the main authorizing officer.

The Palace of the European Commission of the Danube – “V.A. Urechia” Public Library

The Palace of the European Commission of the Danube and the Library: A Common History

More than 130 years ago, the first Romanian nominated to the Nobel Prize, the reputed historian, writer and politician Vasile Alexandrescu Urechia established a public library, by donating 6,000 books from his own collection, which „would serve to more abundant and especially even more Romanian culture of Galați”.

All this time, “V.A. Urechia” Public Library had various seats, the last change took place in 1968, when, by the Decision of the Executive Committee of the County Council, is established that the seat of the library would be the first building of European international statute from the beginning of the 20th century, specially built for carrying out the activity of the European Commission of the Danube.

Along time, the Library has given the prestige of cultural scientific continuity in the Lower Danube area, just like its mentor wished, and organized numerous events and cultural projects, with the purpose of highlighting and promoting the history of the E.C.D. Palace, which would further demonstrate its identity. Among these, one mentions:

A vast majority of the documents from the Special Collections of “V.A. Urechia” Public Library are nowadys preserved in the safebox, that used to keep safe the treasures of the E.C.D.; these books and many other documents are part of the donation of Vasile Alexandrescu Urechia, a member of the Romanian Academy, one of the greatest Romanian bibliophiles from the end of the 19th century, exceptionally valuable manuscripts and printings, many of them rare, a part of them nationally unique, are safely preserved in two rooms from the semi-basement of the building.

Along time, Special Collections have enriched by donations and acquisitions, so nowadays it reaches more than 17,000 documents, structured on many categories: old foreign books, Romanian old and bibliophile books, manuscripts and written correspondence, photos and illustrated postcards, stamps, atlases and old maps, archive documents, leaflets, photocopies, microfilms, diplomas, scores. Among the most valuable pieces preserved here, there are some photos and postcards that illustrate the succesive architectural alterations of the E.C.D. Palace from Galați, from its early decades, but there is also a unique document - Cartea de onoare a vasului Carolus Primus (The book of Honor of Carolus Primus Ship), from the period 1909-1939. 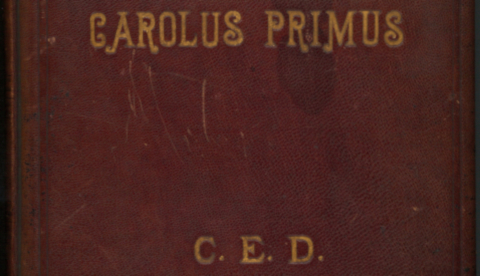 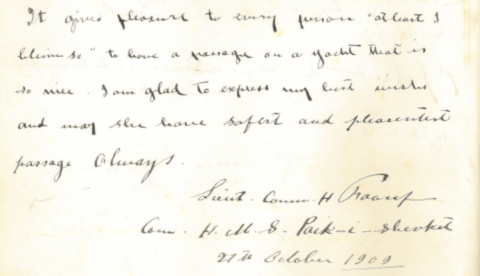 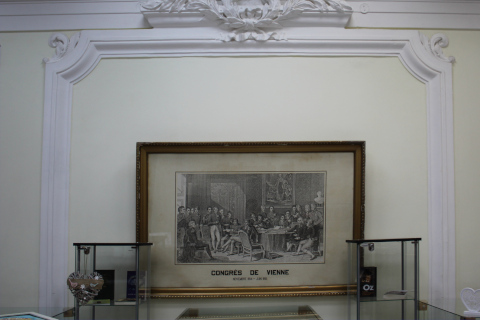 Litography: the Congress of Vienna (1815) 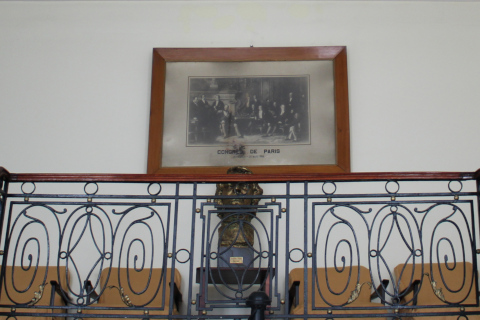 Litography: the Congress of Paris (1856)

There are 2 large size lithographies from the foreign lithograph collection, which present key moments of the European history: the Congress of Vienna (1815), which guarenteed, among others, the freedom of navigation on the Danube, and the Congress of Paris (1856), when was taken the decision of establishing a European Commission of Danube, based in Galaţi. Besides these, there is a 60 mm diameter bronze medal, issued 90 years ago, which recalls the 75th anniversary from the establishment of the E.C.D. This medal was designed by Lucien Georges Bazor (1889-1959), chief engraver of the Paris Mint. 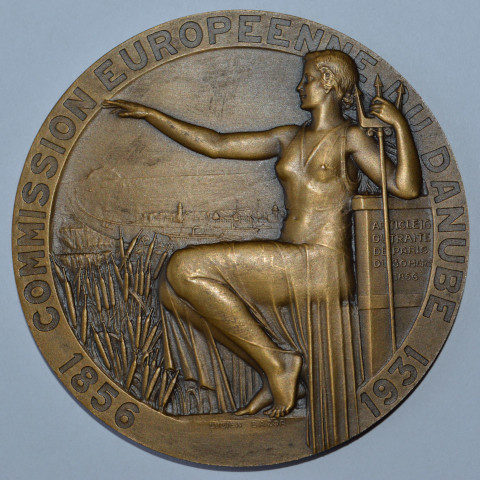 Juno (Junona), the protective goddess of marriage, the home and the protector of water. The throne of the goddess is inscribed: "ARTICLE 16 DU TRAITÉ DE PARIS DU 30 MARS 1856", the article provided for the establishment of the European Commission of the Danube. Circular, on the edge of the medal, is inscribed: "1856 - COMMISSION EUROPÉENE DU DANUBE - 1931". In the background, the C.E.D. Lighthouse and Palace stand out from Sulina. 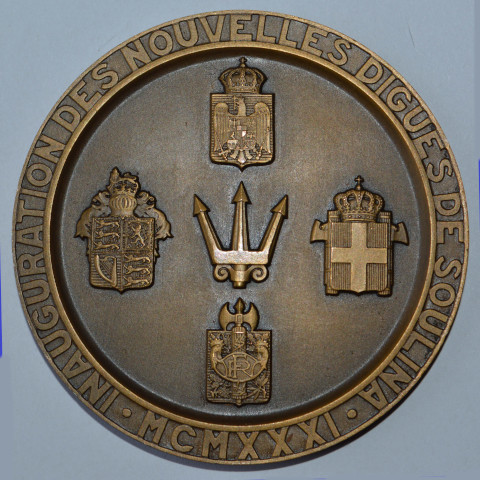 On the reverse, in the center of the medal, is the trident of Junona, and around it, clockwise, are represented the coats of arms of the four states that took part in the activities of C.E.D. at that time: Romania, Italy, France and the United Kingdom. On the edge of the medal is inscribed the text: INAUGURATION DES NOUVELLES DIGUES DE SOULINA - MCMXXXI (1931).

All the documents which make reference to E.C.D. and belong to the Special Collections are digitised and can be accessed on the electronic catalog of the Library.

Built in Galaţi in 1893-1895, the Palace of the European Commission of the Danube, today the seat of the “V.A. Urechia” County Library, witnessed not only the decisions regarding the navigation regime on the Danube, but is also the witness of events that constitute black pages in the history of the world of the twentieth century. Bombed on October 10th 1917 by the Bulgarian-German armies, the Palace of E.C.D. suffered major damage, becoming "a pile of debris." Vertically, only the outer walls and some interior walls were still standing and they were heavily damaged. Like the Phoenix bird, between 1922 and 1923, the Palace of E.C.D. has turned into a stronger construction, allowing the members of the European Commission of the Danube to perform their activity until 1948, when the new political realities in Romania imposed its dissolution.

The seat of the European Commision for the Danube was established în Galaţi, the largest port in the maritime sector of Danube; a free port (1837-1883,) which provided the proper framework for trade transactions, was the seat of several banks, houses of commerce, river and land transport companies.

Indeed, Romania was not only a welcoming host of the European Commission, that only in 1893 had built its own building in Galaţi, but by enforcing the law of 18 November 1963, there were many substantial additions to the European Commmission’s concerns on creating the best conditions for trade development in the Lower Danube basin. All these works would not only play an influence on the economic life of Galaţi, undoubtedly the main harbour in the maritime Danube area, but also on the whole country in full process of progress in the years of the Union.

Galatz has a charm of its own; it is quite different from any other Roumanian town, chiefly because it is the residence of the European Commission of the Danube. The eight Commissioners represent Britain, France, Italy, Austria, Germany, Turkey, Russia and Roumania, and, with the exception of the French delegate, have residences in Galatz and remain the year round. They are the natural leaders of their colonies, and do a good deal of entertaining, which has the charm of the unexpected, for one meets people from the four corners of the earth. Besides receiving in their own homes, they give, collectively, balls and other fetes every spring and autumn in the palace of the Commission, a large building where their meetings are held. They are collective proprietors, also, of a pretty steam yacht, Carolus Primtis,on which they invite favoured friends for excursions on the river. Each Commissioner is President in turn for six months, and when he takes office a siationiere of his nationality comes from Constantinople for the inauguration. [...] Naturally, the Commissioners have other duties than entertaining; all Danubian affairs from the Iron gates to the sea are in their hands and an army of employees at their command.